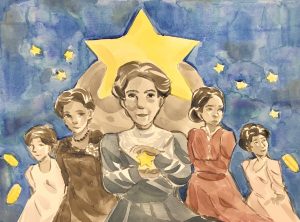 My entry depicts a group of women known as the “Harvard Computers” who worked at the Harvard Observatory for a man named Edward Charles Pickering. In 1877, Pickering became the director of the Harvard Observatory during a time of great technological advancement, increasing the prevalence of photography, and subsequently the astrological data available to interpret. Pickering, in what appeared to be a progressive maneuver, employed his female staff to work examine, catalogue, and observe the data presented, however, the decision loses appeal when you take into account the workload of these women, their 25 to 50 cent wages, and their capacity to achieve greatness. Despite this, the women made significant contributions to the field of astronomy, especially Henrietta Swan Leavitt (pictured in the front) who discovered the period-luminosity relationship for Cepheid variables, a contribution that helped shape future astronomical discoveries. Henrietta and the many other talented “computers” performed incredibly important work, however, they received little to no recognition for their contributions.