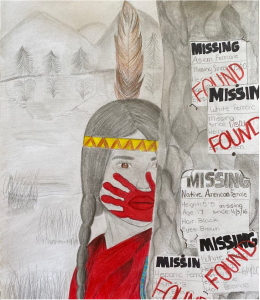 “My artwork is inspired by the Missing and murdered indigenous women movement. Native American women face murder rates that are more than ten times the national average and four out of five of Native American women are affected by violence to this day. By being a part of this community along with some family and friends, it is very important that attention is brought to this ongoing issue. Indigenous women of all ages go missing and not enough is being done. I would hope that in the future more effort can be put into finding these women. By having family and friends who are indigenous, it would be unbearable to know something happened to them.”